Berne is a charming and friendly Swiss Community. From almost any direction, you will be welcomed by our tallest attraction before you even reach the city limits! Be sure to stop by the 160 foot tall Muensterberg Plaza and Clock Tower and take it in. Take a step back in time at Swiss Heritage Village and Museum or stroll along downtown and take in the sights of our Swiss-inspired architecture. You’ll see Berne is in the midst of growth and a future filled with expectation when shopping downtown. Founded by Swiss Mennonite immigrants in 1852, Berne and the surrounding countryside is a picturesque community. 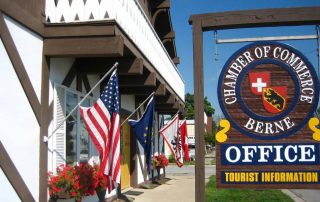 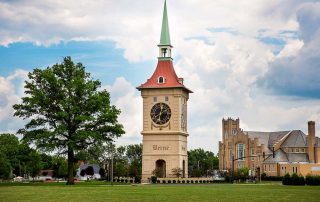 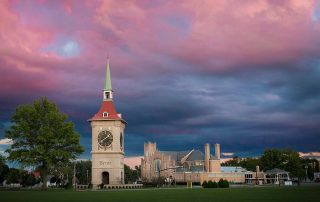 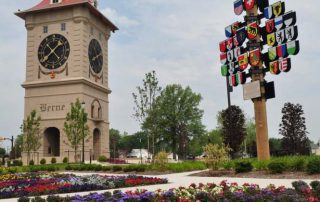 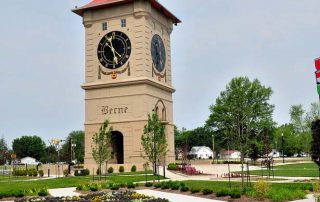 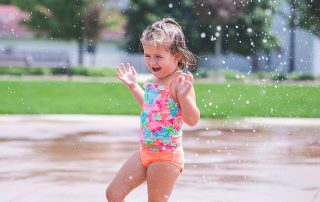 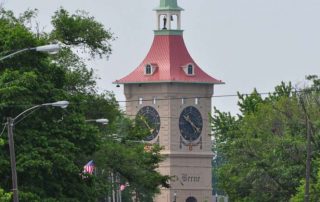 (Based on the 2015 American Community Survey)

When the Muensterberg Mennonite congregation from Switzerland migrated to Adams County in 1852, they clustered in a sparsely settled region in the southern part. Although there were a few earlier settlers in the region, the area became known as “Muensterberg” because of sheer numbers. The church was named after the mountain they had lived on in the Jura Range. Muensterberg’s boundaries kept expanding as more Swiss immigrants identified with this settlement and located here. Sprinkled throughout the colony were some English speaking homesteaders who had come earlier. These were, mostly, second and third generation Americans from Pennsylvania and Ohio who had joined the Westward Movement. Having been formally schooled, they often held public offices. By 1890 Muensterberg’s population was about 350. The figure was arrived at by estimating its area as 25 square miles and applying U.S. Census figures of 14 persons per square mile for southern Adams County.

In early settlement days this prairie was known as “The Wilds of Adams County”. In time, primitive efforts were made to drain the strand of “kettle pots”. But it was not until 1914 that the county engaged in a two-year project to drain the Blue Creek Prairie. Used, was a steam powered floating dredge, 14′ wide and 20′ long, with a front load bucket. The dredge was floated by systematically building dams ahead of the work.

A formidable obstacle to cross, travelers usually made end runs to the Ohio line. Eastward was a land peat bog, officially mapped as “Thompson’s Prairie”, but known mostly as, the “Muck”. This grassy open place tended to separate the Swiss settlement from the English. To the south and southwest, the Wabash river also served as a cultural division. But to the west, the enclave’s western limits could not be as clearly defined as was interlaced with an earlier Swiss colony identified the “Emmenthal.” This settlement, which started in the 1830’s, was centered in French Township.

Twenty years after the Muensterbergers settled here, the community had cause to be exceptionally upbeat. A railroad was coming through the very heart of Muensterberg! This could mean a local shipping area receiving point. At this time, Fort Wayne was still the nearest livestock market. To get there it took a circuitous route of some 50 miles over pristine trails and “roads”. And, distant Willshire, Ohio was the nearest trading post for staples. Most travel was by walking or spring wagons. (The horse and buggy era would not come until crushed stone was available for roads; some twenty years in the future.) Entry of the railroad would mean the sudden demise of frontier life and a new beginning. Muensterberg was exalted!