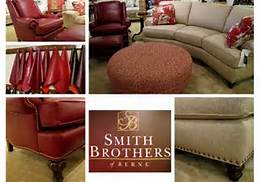 August Chamber Member of the Month!

Since its inception in 1926 as Adams Manufacturing Company, the Dunbar spin off company focused on making affordable quality chairs. Over the last 86 years the company has seen several owners and undergone many dramatic changes. The current owners are Steve Lehman, Tom and Roger Muselman, and Roger’s sister, Karen Thomas. Throughout the years, keen business decisions and a commitment to top notch quality furniture has proven successful for Smith Brothers of Berne, Inc.

Today, President Steve Lehman has seen several decades of growth with Smith Brothers. The company’s products are now sold in over 30 states and in Canada; and the facility, which started as a 12,000 square-foot building in 1926, has expanded 25 times its original size to nearly 300,000 square feet in two buildings to accommodate growth. Smith Brother’s commitment to stay American-made and keep one-hundred percent of its manufacturing local has earned the company recognition from the Discovery Channel. In their three-part Made in America series, airing on national television this fall, the Discovery Channel will feature Smith Brothers as an example of a successful American company that has stayed true to its roots and remained domestic. The Chamber will post the airing schedule as details become available.

Manufacturers of custom-built, upholstered furniture, sold through fine furniture stores in the Midwestern and Eastern states.